Each week, I listen to a band or artist that I’ve never really taken the time to understand before. The list of contenders was compiled by recommendations from friends and my own shame.
This week was the turn of Australian pop/rock sex rockets, INXS.

What I Knew Before
When I was sixteen years old, I bought the director’s cut of Donnie Darko on DVD. In one of the opening scenes, as young Donnie is riding home after waking up on the local golf course, Never Tear Us Apart plays. To the best of my knowledge, that was the first time I had heard INXS. For a long time, I liked that song but didn’t know anything more.
I was later made aware of Michael Hutchence but through a cruel mention of the circumstances in which he passed and the tabloid furore around his relationship with Paula and therefore with Bob. That was about as far as my knowledge went.

What I Know Now
There is a lot more INXS music than I had ever considered. In a career spanning, twenty years, they released ten studio albums. After Hutchence passed, a further two albums were released. There is also a lot more to the band than the beautiful frontman and the junk press stories about his personal life. There’s a lot going on musically, shared between the six friends from Sydney, New South Wales. There’s a real funk to the way they played together and the breadth and depth of Hutchence lyrics is not something I had considered before.
Convinced by enough women with absolute heart-eyes for Hutchence, I also watched the 2019 documentary, Mystify. I had misjudged so much about the band and about Michael’s incredible abilities as a singer, a poet and one of the most beautiful people to have ever existed. I was completely won over and realised that everything I knew about him had come third-hand and via the press who vilified him.
There are a lot of great INXS songs and they were hung out to dry on any number of occasions, leading to this general malaise and a slip from where they should be heralded.

Favourite album:
It’s got to be Kick, right? 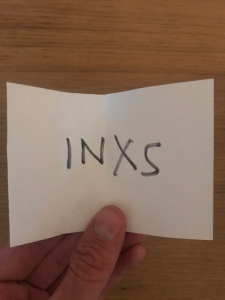 Spotify my favourite songs from this project.

Watch the trailer for Mystify: