Each week, I listen to an artist I’ve never really got into. This week has only been slightly impaired by listening to the Hamilton soundtrack on repeat but my artist of choice was Mexico City’s very best, Mexrrissey.

What I Knew Before
Weirdly, I saw Mexrrissey a few years ago when they blessed Camden with their presence and performed at the Electric Ballroom. They combine the music of The Smiths with Latin beats and rhythms. The excellent part of this is that you can listen to The Smiths without having to think about the terrible person that Morrissey has become.

What I Know Now
Pretty much as above, but I’ve learnt that they only have one album; No Manchester, released in 2016. 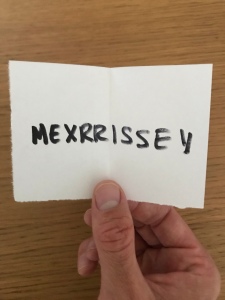