Each week, I listen to a different artist, pulled at random from a pickle jar I keep on my drinks caddy. This was was the turn of scribble-faced rapper, Post Malone.

What I Knew Before
I thought that Post Malone was short for Post Office Malone. I was familiar with his two biggest hits; Sunflower and Circles. I had seen pictures of him. I guess you would call him striking-looking. That was about it.

What I Know Now
Post Malone, or Austin Richard Post as his dad calls him when he’s in trouble, was born in Syracuse, New York. His music is a heady mix of hip hop beats combined with country (linked to his time in Texas) and R&B. He seems to be a real fan of music, citing Bob Dylan as a huge influence and DJing at an emo night in LA. He’s certainly the produce of his tastes and it’s great to hear something that sounds so refreshing and different alongside being an area of music that I wouldn’t immediately think had much to offer me. 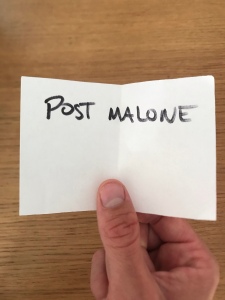