I learnt about Thanksgiving through Addams Family Values, which is a fairly solid historical depiction. I was excited to experience my first one in the land of the free and the home of the brave, but first, Dunkin’ Donuts.

Jaz and I set off early. We had a lot to get done. We got Beyond muffins and ridiculously sweet coffees and took the subway towards 34th St and found a good spot to watch the Macy’s Thanksgiving Parade from. This meant tripping over kids and working out what the floats were supposed to be. After seeing the Green Giant, a Power Ranger and Snoopy, I was cold enough and we walked on in search of other entertainment. We wandered around Times Square, had more coffee and a doughnut and realised that we had an awful lot of time to kill before Thanksgiving dinner.

We walked through Central Park and found a spot which I think was in one of the John Wick films. We stopped on the edge of the lake and I thought of Catcher In The Rye. It was bitterly cold out but the park was busy. Everyone was in good spirits to celebrate whatever it is they are actually celebrating at Thanksgiving. We got a subway to Grand Central station.

When I was a student I was even more pretentious than I am now. I had a huge black and white print of Grand Central, with the sunlight coming through the crescent windows, up on my wall. It meant a lot to me to suddenly be stood in this incredible marble palace with a full-on New York bustle around me. The lighting was golden and everything was beautifully distant from the grime of the city. 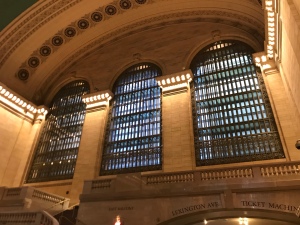 We took a subway all the way up to the Upper East Side and collected some booze for our hosts. It was great to arrive at Ben and Audra’s, not just because it was warm, but also because they were so gracious. Ben’s friends, Chris and Steve, were visiting and the six of us immediately got to a wonderful level of chatter that was only stopped by the delicious food that was served and then the seriousness of the card games we played. Someone kept my wine glass full and then shots of Limoncello saw me off. We left late and rode the subway all the way back to the Lower Easty Side. 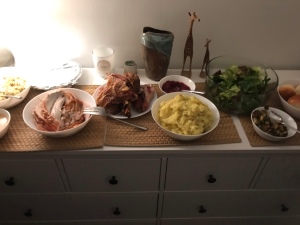 We collapsed into bed and I fell into a drunken slumber.