Last night I went out for drinks with another guy. For some reason the very prospect of such a venture made me more awkward than my usual state of ‘tensed up and ready to drop dead’.

The reason for this is no fault of my own. Society makes it difficult. This dude (A) and I got chatting at a Christmas party and realised we had loads of stuff in common. We talked about music and university experiences and books. The next time we saw each other, much more sober, it was as if the whole thing had never happened.
I consulted my brother who can often be the Tom Cruise to my Dustin Hoffman.
“Just ask him out man, it’s not gay. You get on. Why are you being weird about it?” – Cracking advice there bro. The problem being I hadn’t asked anyone out in over two years.

Eventually I plucked up the courage and asked A out for a beer. I can expressly remember telling him there was nothing gay about it as though this might convince him my intentions were honourable.
It worked. We went out, had some beers, talked about a multitude of things and those first date nerves are out of the way and everything is fine.

So don’t let anyone tell you there is something wrong with a bit of man on man time (for want of a better phrase). 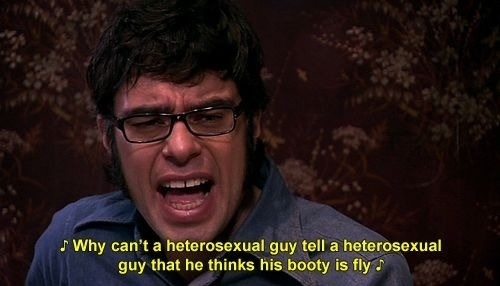