This week was the go of self-described Texan “boy band”, Brockhampton.

What I Knew Before: Very little. The recommendation came from my Twitter friend Daisy (hi) who offered the band up when I was compiling my list in late 2019. I know they were due to play gigs in the UK and I’m now gutted that I’m not going to see them.
What I Know Now: They released their first mix-tape in 2016 and then THREE albums in 2017. They’re led by Kevin Abstract (great name) who has also put out some compelling solo stuff. Reading up on them, it sounds like an amazing experience to be a part of a collective like Brockhampton. They all bring something different and clearly work together well.
Favourite song(s): FACE, NO HALO, SUGAR.
Favourite album: iridescence 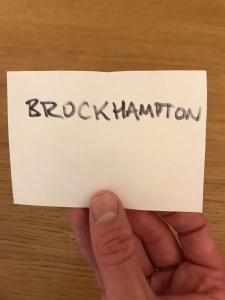