From the opening strains of Show, it is clear that Southend-on-Sea’s very own Carousel have a goal in mind, and that’s to lift you up. There is nothing to stop the smiles spreading as their sublime vocal melodies explode and their joyous mix of folk and blues push on like clockwork. Their take on Americana is infectious.
Carousel are Thomas Eatherton, Chris Hobart, Sarah Holburn and Toby Shaer 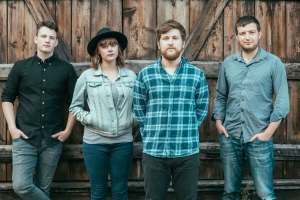 It takes a lot to stand out in this age of music being available everywhere and nobody giving a shit about artists who are actually doing something, playing instruments, trying hard. It’s not particularly “in vogue” to be in a band. There are plenty of bands doing it, especially locally, so when you hear something that actually makes you feel feelings, makes you feel like you might be an actual human being, why not go for it.

You may be familiar with Dead Horse, which has been doing the rounds on Facebook ahead of the EP launch. It sounds like a road trip soundtrack song. It drives itself and you should too. Again, the vocal melodies rise up during the chorus which features painfully relatable lyrics. 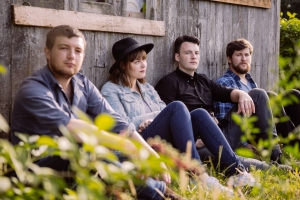 Porcelain, the middle child of the Carousel EP family, is the slow, considered ballad  in the midst of the thriving city soundtrack. Like the title’s subject matter, it’s beautiful and fragile. Sarah takes the lead on vocals to devastating effect. I’m not crying, there’s just something in my eye. It’s followed up by Throw Me To The Wolves, the polar opposite. Packed with distorted guitar and a layer of scuzz to the vocals, it’s a stand out track for me. It’s all well and good to be able to craft something melodic and sublime, but to show you can still have an edge is an exciting prospect. It’s Carousel Go Electric.

Comfortable Skin closes the EP like it is wishing you goodnight, Thomas’s lyrics about staying true to oneself matched in tone with backing melodies to make your hair stand on end.
If you’re looking for range and you’re looking for treatment, then you’ll want to get in with Carousel.