We got a yellow cab from JFK and towards Manhattan – already a very American sentence. I was experiencing sensory overload following the flight and all of this new stuff wasn’t helping. We were both wiped out so the journey was made in near-silence. It was only as the taxi pulled up outside our apartment that Jaz and I were able to grasp at any conversation. We paid the driver and dragged our suitcases up three flights of stairs, a hallway that smelt of cigarettes and oily food.

Our apartment faced a car park but had the old fire escape ladder you see in all New York-based anything. I dragged the metal shutter across and opened the window to climb out.
‘I don’t think you should do that,’ Jaz said. I closed the window and we went out for the day to stop ourselves from getting hit by jet lag. We walked from our apartment on the Lower East side, up Bowery to Astor Place and through to Times Square. I couldn’t believe how big everything was. It all looked so familiar because my head is full of American cultural references. I thought of Sal Paradise being dropped off after his drive from Denver. I saw the Rockin’ New Years Eve Ball ready to drop. 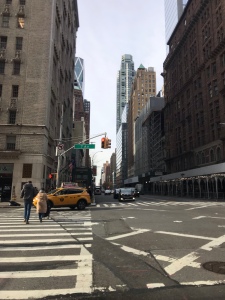 We walked from Times Square to Central Park where the first thing I noticed was the pathway where the Sticky Bandits had been picked up by the police. We found the carousel which I’m really hoping is the same one that would have been there for a fictional Holden Caulfield in the 1950s. We sat and watched families go around in circles as old music played. 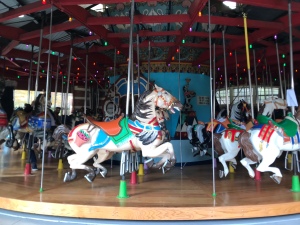 We found Strawberry Fields where the Imagine mosaic is. There was an old Rasta playing Beatles covers on a guitar. We sat and listened while watching everyone line up to have a photo taken with the logo before walking off again. The Dakota Apartments, where Lennon lived with Sean and Yoko until his death in 1980, overlook the park.

We walked back to Times Square/Broadway and queued to get into Ellen’s Stardust Diner, where the waiting staff are all trained musical performers waiting for their turn to get into Broadway productions. They sing while you eat. It’s kitsch and a lot of the songs weren’t for me but the experience was worth it. It was also a good opportunity for me to break from my usual vegetarian ways via a Reuben sandwich which I had with waffle fries and a Diet Coke. Jaz had a cheesesteak sandwich. After the Grease megamix, we hit the road again.

We found Radio City and booked our tickets to go to the top of the Rockefeller Centre. We had to wait an hour for our slot so watched ice skaters under the lights of the scaffolding around the Christmas tree. 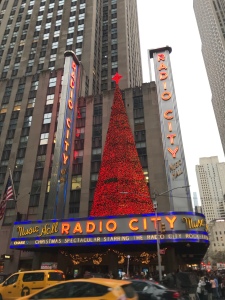 I didn’t realise that SNL was recorded inside the Rockefeller Centre until we were queued to go in. It was a Saturday night. I wondered if we would spot the celebrity host or any of the amazing comics featured in their cast. We took a lift up 86 floors to the Top of the Rock where I was immediately hit by my jetlag. 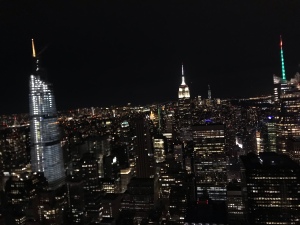 I was amazed by the views, especially over towards Central Park where there was a great vacuum of light. We came down again, bought passes for the Subway ($36 for the week) and headed back to the Lower East Side for a well-deserved sleep.