‘Ahh, Mr Schiernecker, we’ve been expecting you.’
‘Good, we made a reservation.’

I grew up with Pierce Bronsnan as Bond. I went back to investigate the rest but Brosnan will always be on the mark for me. There’s something incredibly dated about the way he spoke to women and the way he threw his puns around, even for such a short time ago. I love Brosnan but in the way you love a parent, you’re still allowed to point out their faults to your friends.

One of my favourite things about Bond when I was a boy was him drinking Vodka Martinis, especially when he asked for them “shaken, not stirred”. Without a degree in mixology I had no idea what the term meant and imagined the drink being constructed in its entirety before a Tupperware lip was slipped over the top and they cautiously shook it rather than stirring it with a swizzle stick. To the credit of my younger self, I wasn’t far wrong.

When I wrote my list I had never had a vodka martini. I appreciate it’s quite a small item but it’s something I always wanted to do and may not have done if I hadn’t forced my hand and written the list. It was also an excellent place to start, a way of easing myself in rather than booking a flight to Iceland.

I met my friend Stephanie through Twitter. I thoroughly recommend it as a means to make friends. It cuts out a lot of the awkward friends of circumstance you accumulate in life. Steph and I get along because we have a lot in common. I suppose that is how we originally started talking but I can’t remember the specifics of it aside from her chastising me for putting ketchup on my scrambled eggs. We both love The Libertines, alcohol and self-analysis. Born in Morocco and having spent time in both Paris and London during her formative years, she’s a bright and brilliant person and I learn a lot from having her in my life.

Having reviewed my finalised list when I first posted it to my blog she asked if she would be able to help me with any of them. I told her I would love that and to let me know which item she fancied the look of.
Within minutes she was back, telling me she wanted to be the one to drink vodka martinis with me. She was shocked I had never had one and went on to tell me about the “dirty” martini her husband had been offered on a recent trip to Copenhagen, this included olive brine as well as the two key ingredients. I wasn’t sure I could get behind such things.

We picked a date and I let Steph choose a venue. It would be fair to say she has a much better knowledge of London than me and in some ways, a taste for the finer things. When she called up her choice of bar to ensure they had our chosen tipple they apparently replied ‘of course, madame.’ I suppose most bars have to. It’s only bested by the gin and tonic.
I decided I was going to wear a suit, you know, to do the whole thing right. I told Steph I was going to dress up and she assumed I was joking because it was so out of keeping with how I usually turned up for anything; in Converse, skinny jeans and a t-shirt. The suit I wore was one I had recently bought and was calling my birthday suit based on the fact it had been delivered in the week of my birthday. I decided I was getting to a point where I needed to have some suits in my arsenal for occasions. It was no good anymore to just have the one charcoal number I wore to weddings and funerals. There were times when something finer was needed.
This grey Donegal suit was beautiful. It made me feel like I was in Mad Men, which is, of course, mostly why I bought it. As I was running early for our meet up time of six pm I sat on the steps of the St Martin-in-the-Fields church on the edge of Trafalgar Square and watched the sun go down as I edited my latest manuscript. Steph text me to let me know she had also arrived early and I dashed over to Leicester Square Tube Station to meet her. I have become so used to people being late to meet me, I had presumed I had plenty of time on my hands. I had forgotten Steph was as timely as I was.
She was shocked to see me in a suit and worried she hadn’t dressed up. She’s elegant and continental enough to turn up at a bar in a bin bag and look cool.

We decided to first go for dinner, as we had both just finished work and knew it was a bad idea for either of us to start drinking cocktails on an empty stomach. We had fallen foul before. Despite Steph’s insistence she was now a hardened drinker, I know neither of us can handle our booze. Again, Steph had made the selection of venue. We went to Café Boheme, just around the corner in the hope it would be like dining in Paris. It wasn’t too far off to its credit. We sat chatting until the staff came over for the third time to take our order.
I ate rabbit and Steph had steak tartare as we finished a bottle of Cabernet Sauvignon between us and caught up. It was the first time we had hung out since my 28th birthday and her recent trip to Austria with her husband and two sons. I love hearing stories about her boys. They’re at a brilliant age where they are in a position to cleverly answer back to everything they are asked to do or told. They taught me something quite recently. They asked Steph if she knew what a Chinese Whip was. When she told them she hadn’t they whipped out their middle fingers. They have since started doing this in every photo taken of them. To me, that’s brilliant. To her, it must be frustrating but is of course, also hilarious.
Steph insisted on paying as a treat for my birthday and we stood outside smoking amongst the Big Issue sellers before she could Google Map our way to cocktails.

Her choice was the Covent Garden Hotel bar, Brasserie Max. It was the kind of swanky joint where they have a doorman. In the words of the Elephant Man, “I’m not used to being treated so kindly”. I shuffled my way in with a metaphorical hessian sack on my head and we were given a choice of tables. Around us, corporate fat cats in thousand pound suits and with those terrible blue shirts with white collars sat around chortling at how poor the rest of the capital was in comparison. We were going to have to do what we could to block them out. Fortunately, we were sat around a corner with a wide wall blocking us from having to see the restaurant.
Steph and I were given a menu and pretended to give it some consideration and that we hadn’t already decided exactly what we were going to order. I tried not to audibly gulp at the price list. Even with the shallow glasses the martinis were to be served in, I was out of my depth. 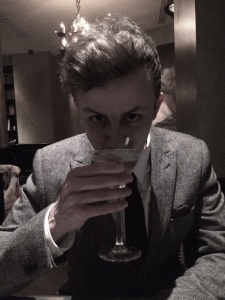 We ordered our first drinks and waited patiently. The bar was stocked with so many different kinds of spirits that a set of stairs had been built into the back wall to accommodate their tiny glass bottoms. They sat patiently waiting attention like the Von Trapp kids saying goodnight. We were brought our drinks. I tried to hide my excitement. I felt like Bond. I was in my finest suit. I was wearing a tie. I was sat with a beautiful woman from somewhere exotic and we had just stopped a nuclear missile from destroying the free world. We raised our glasses and I took a tentative sip, trying to make it seem like I did this sort of shit every single day of my life and that I was packing heat.
It wasn’t too bad. To be honest the first one tasted a lot like alcohol. I thought the magic of cocktails is that they taste fruity and marvellous rather than like petrol. It certainly cost more than £1.10 a litre (the price of unleaded in Southend as I write this). The second one went down a hell of a lot smoother. My favourite bit was the olive. The third one I don’t remember. I don’t know how Bond could fucking shoot straight after a couple of them. They’re more lethal than he is.

When the bill was brought over I felt it was only fair I covered it. Steph had paid for dinner and the cocktails were for my benefit, although the following morning I would struggle to remember what it could have been as I attempted to scoop my brains off my desk and not break down in tears.
We stumbled back out onto the street and tried to hold ourselves together. I hoped not every item on my list would leave me so out of pocket. If so, I would have been £2,340 worse off for the experiences. I suppose it’s true what they say, you can’t take it with you. We stumbled along to the entrance to the train station and said goodbye. I sat on the train and tried to focus on my manuscript. I tried to focus on anything except being that one terrible guy on the train home who looks like he’s ready to vom.