That’s right, drawing upon the heroic efforts of Operator Please for a title there. It had to be done.

Last night was the last ‘Sahara Social’, a series of events organised by the angel-like patient coordinators of the Sahara Trek I am heading out on this weekend. As it turns out it was the only Sahara Social I was able to attend (I believe one was on when I was at a festival…Glastonbury maybe?). It was a really good experience to be able to meet the people I am going to be walking with for the next week, an opportunity to get our heads together and work out the finer details. It was also my first sighting of the elusive WC, the individual who has raised over seventeen times what I have for charity and has something of a cult status amongst us Trekkers (not to be confused with Trekkies).

Fortunately everyone was lovely. We had initially paid a deposit to the bar, Ping on account of the size of the group. Despite that some people still didn’t make it down so there was more beer money to go round after dinner.
It was nice to see that everyone seems as hectic as I am at the moment, if anything it has set some of my worries aside. I seem to have done more exercise than a number of people and nobody appears to have started packing (which will very much be my last pre-Sahara battle aside from making it to the airport). The organisers were still in good spirits when answering questions and served as courteous hosts, fielding the same repeated platitudes about the details of our trek.

The event was supposed to include ping pong but as soon as I realised I cannot play ping pong to save my life (fortunately the plastic balls were not on fire, or bullets) I just stood back and watch, playing particular interest when the monolith that is WC beat my Sahara buddy Terri down like she had insulted his honour.

It was a cool evening but it made the whole thing a lot more real. With just 36 hours until our flight I am wondering if I will even have time to set my out of office before I have to pack. 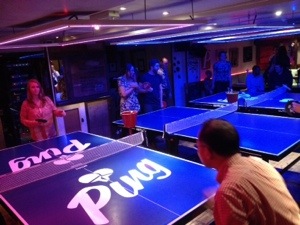