I am shattered. I just walked a mile to catch the train to London.
I am going to watch the marathon today, and I am obviously being satirical, although I did have to pace it because I spent far too long lost in my own reflection this morning.
Two very good friends are running today and I’m off to offer my own brand of enthusiastic support.
I’m reminded of when one of them, L, asked me, two other friends and his brother in law, to come with him to the site of a skydive he was doing for the same charity he is running for today, Little Havens. We mercilessly bullied him for two hours, and his parting words were “just fuck off”. If he had died it would have made a fitting epitaph.

I had every intention of being with them today, although I did have vague hopes of running as well. I applied for a place last October but didn’t make the cut. In hindsight it could be a blessing because to date the furthest I have run is six miles, maybe I’ll be in a better state by next April. I know I’ll apply again later this year.
There is also the issue of splitting my charity donations. This year I am trekking across the Sahara and raising money for The Prince’s Trust. People are reluctant enough to donate money they would otherwise be wasting to one worthwhile cause, let alone two. Next year I’ll have another crack at the marathon thing, and support a different charity. It’s hard to focus on any one when there is so much hardship.

In terms of today though I am already so proud of L and D. They both applied under the assumption I would get a place and we could train and support one another. I’m there to support them, and to show them I am a man of my word. Far too many people I know have flaked today. TAW and I will be there though, screaming and waving like a right pair of cotton-headed ninny muggins.

I went with L to register for the marathon on Thursday evening when I finished work. Registration was held at the Excel centre (“BACK ON THE DLR!” as I like to scream to the tune of Back In The USSR). There was a real buzz to the place as proper athletes sauntered about with the kind of prowess only superheroes should be able to exhibit when dressed solely in Lycra. There were stalls for specialist clothing, stalls for specialist dietary requirements, stalls for supplements, stalls for footwear. We stood about like a couple of comfy airsoles!

As soon as registration was complete and we got outside, L asked me if I fancied a beer. I wondered ever so briefly if he should be drinking three days before the marathon. As soon as we got inside he asked the barmaid if they had a cigarette machine. He thinks he is the Sid Vicious of the marathon. I just don’t want him to become a statistic.

I hope I get a good look at them today, and I hope they’ve vaseline’d every square inch of their bodies, and they should know everyone is supporting them.
It’ll be like the end of Return Of The Jedi when Obi Wan, Yoda and Anakin/Darth are stood grinning at Luke.
I’m talking Guinness Obi Wan and Shaw Anakin, I’m not buying all this CGI booster pack addition. Leave it be Lucas, leave it be. 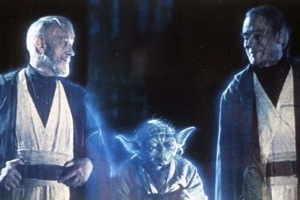 Good luck today guys, and to everyone else taking part, and may the force be with you!