It was a very good year.
I finished two novels.
I got back into journalism.
I got a promotion.
I went to Paris.
I saw some good films.
I heard some good music.
I lived.
I loved.
I continue.

January
The first thing I recall from January is that it was mine and Kate’s anniversary. One year. I’ve never managed that before, or else nobody has stuck by me that long before. It was perfect. She is perfect. I’m very lucky.
I also lost my Grandma who passed away on the twenty-eighth after fighting so hard. I still miss her every day. Things happen and I get the urge to call her up and tell her about them. She was such an incredible force and more supportive than I thought any person could possibly be. I’m carrying her with me. Every success is our success now. I still want to make her proud.

February
I turned 25. Suffered my annual birthday crisis (“oh god, I’m ageing, I’m AGEING!”) but soon got over that when Kate took me to see Backbeat, the musical about the early days of The Beatles and the loss of Stu Sutcliffe.
I also got a mandolin. I still haven’t mastered it but my Losing My Religion is almost plausible.
I finished my counselling sessions and felt ready to conquer the world.
At the end of the month I started this blog, which had over 7,000 views in 2012. It’s not Google standards but I’m proud of it and I appreciate every single visitor, commenter and contributor.

March
I spent most of the month writing my first novel Situation One. It was a task of pure pleasure. It took me nine months but on the twenty-forth I finished the first draft. I cried. I was so pleased to have finally got through something that I just cried. I’m still so proud of myself and of the story and the characters.

Kate and I went to see The Civil Wars and fell in love with them even more. It was one of the only gigs I’ve ever attended where you could literally hear a pin drop.

April
I performed in my second ever improvised comedy show. It was the first one I had done since Danny passed away and it became kind of a big deal. Before he died I told him I wasn’t going to return, that I had done the series of classes as I had promised I would but that I wanted to concentrate on other things. It turned out that I didn’t. I enjoy spending time with the group and I enjoy performing (the majority of the time). I’d like to thank him for pushing me into it in the first place, wherever he has got to.

May
I got my fourth tattoo, a puzzle piece on my left hand side. It symbolises the missing piece that I’m constantly striving for, that level of perfection that I crave.
I also got involved with a charity project for the first time, helping out at Little Havens hospice. The experience had a profound effect on me and left me wishing I could do more for those less fortunate than myself.

June
I got to take Kate to Paris. It was one of the best weeks of my life. It just secured us even further and I didn’t want it to end. Last night we were looking through the photos and there is a happiness that just shines right out at you. It was perfect.

I also sent off a copy of Situation One to a literary agent. I had this terrible fear that the rejection of it would completely bowl me over but it taught me an important lesson in believing when others don’t.

July
I took Kate to The Ritz. It was a belated birthday present for her. It was another lovely day, full of outrageously posh people and us pulling stupid faces. 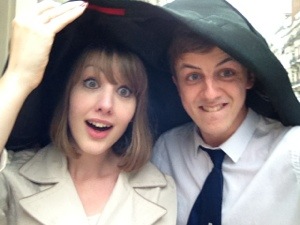 August
Having not been destroyed by sending one copy of my novel off I sent out ten. One by one they were returned to me but it made me want it even more.
I also returned to Reading festival with my dear sidekick James. He made me watch Odd Future, I made him watch The Shins. We got to catch up and spend some quality time together. Seeing The Vaccines and Kasabian with him was one of my highlights of the year. Don’t tell him I said that though. 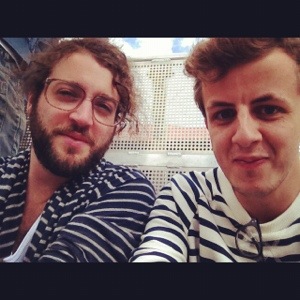 September
Kate and I decided to elope to Devon for a couple of days. This was arranged in the post-Paris slump we found ourselves in. It was lovely to see the places she had visited when she was little and accompanied by the clan.

I also got accepted to journey across the Sahara for charity. This was as a direct result of two things; my desire to help people and my recent wanderlust. I’ve raised over £500 so far. As part of my fundraising I recorded a five track EP that people could download in exchange for donations. It turned out to be annoyingly catchy for some.

October
I landed my first article for film website Screen Geek. Having not written anything journalistic in two years I managed to get back on the horse. I’m now writing for Sound Influx as well and looking for any other work in the new year. I also put the pieces in motion for NaNoWriMo.

November
In three weeks I wrote my second novel Visions Of Violet. This is literally all I did for a month. There was nothing else. It has since reduced women to tears and needs redrafting and sending off this year.
I performed in my third improv show, raising £70 for The Prince’s Trust.
I also managed to secure a promotion at work and am now a manager, which is possibly one of the most terrifying sentences ever composed.

December
I started work on my third novel (currently called Hold On Sue Zen) but realised I needed some down time so in Hemingway spirit threw myself at alcohol. It worked out quite well. I ended the year purged and cleansed and ready to go again.

I know that isn’t everything that happened. Those are just the key things that shaped my year. I apologise if I left something out that you were involved with. It mattered.

While writing this I delved into my journal and found my resolutions for 2012.

I don’t think I did too badly.

Here’s to 2013 though.
I’m going to compose an equally ridiculous set of resolutions and push myself harder than ever to get where I want to be. Nobody else is going to do it.