Each week, I pick a band or artist from a pickle jar and listen to them as much as possible. This week was the turn of London four-piece, The Big Moon.

What I Knew Before
I knew nothing of the band before this week. They were a recommendation from my friend Sarah when I told her I didn’t have enough female bands in my wheelhouse.

What I Know Now
The Big Moon have two studio albums, Love In The 4th Dimension and Walking Like You Do. They formed in 2014 and if it wasn’t for my inability to know anything about new bands (post 2012) then they would definitely have been a band I followed with a lot more interest.
I’ve been into indie since my teens. For a long time, I knew everything that was hot, cool and young. Then I was no longer any of those things and I slowly lost my grip on the NME mantle. It could be argued that NME has done the same since. I’d like to think I’m linked to their decline.
That aside, The Big Moon are cool as shit and you should listen to them. 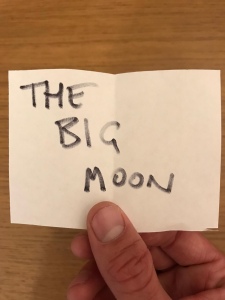 Spotify my favourite songs from this project.