Every week I take an artist’s name out of a pickle jar and learn as much as I can about them. This week was the turn of Chicago-based alternative rockers, Wilco.

What I Knew Before: At my friend’s 30th birthday, I was in charge of the playlist. He requested Wilco. I played a lot of Wilko Johnson before he broached the subject with me.
What I Know Now: Wilco have a commendable amount of music and a “golden era” in the eyes of their fans. They’ve been active for nearly thirty years and have had twelve members in that time. They received a lot of press following their fourth album, Yankee Hotel Foxtrot, being rejected by their record label who didn’t feel it was commercially viable. They had to buy the masters of their own album back and make it available through their own website before finding another label, who were just under Warner anywhere, so the whole thing felt pretty fucked up.
Favourite song(s): Jesus, Etc., Love Is Everywhere (Beware), Wilco (The Song), Chain of Broken Hearts.
Favourite album: Mermaid Avenue Vol. II might take it. It sounds absolutely mental. 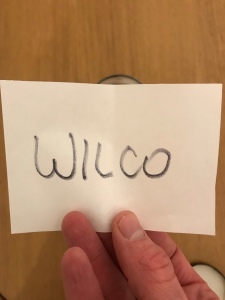