The three albums which define my early childhood are REM’s Monster, David Bowie’s Hunky Dory and Jason Donavan’s Ten Good Reasons. Luckily for all concerned I became disenfranchised with the latter before I was ever asked what my favourite albums were.
The first two, meanwhile, are entirely down to my parents, who would permeate bathtime with glam rock hits by The Sweet, T-Rex and David Bowie.
They saw Bowie on his Glass Spiders tour. Being that I was busy being a baby they didn’t take me with them, a gripe I have kicked up with them ever since. The reason I mention all this is to show how deep the lightening bolt runs, how indebted I am to David Robert Jones, and how much it meant to me when my own Lady Stardust managed to get us tickets for the exhibition of his extensive work and wardrobe at the Victoria & Albert Museum in South Kensington.

The first two things to be aware of about the exhibit are as follows; the audio guide was put together by Tony Visconti and is like aural sex, and you aren’t allowed to take photos. If you were then it would have taken us five hours to get around rather than the two and a half hour lap time we managed.

The exhibition covers Bowie’s career from his fledgling performances as Davie Jones and the King Bees right the way through to The Next Day. Along the way the provided headphones pick up sensors linked to particular events, videos or interviews and play them through. It’s amazing to think it is all the product of one man’s imagination and the literary depths he pulled from. Beforehand I was unaware Diamond Dogs was Bowie’s attempt to create his own dystopian landscape after being refused the rights to make a musical based on Orwell’s 1984. 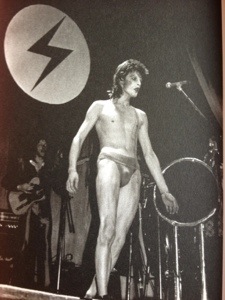 There are so many aspects to Bowie both as a performer and as a man. It’s incredible to see it all collated, and to wonder where it has been hiding for all of these years. Why the cocaine spoon he used during his Ziggy phase isn’t on a revolving plinth in the British Museum is beyond me.
I think one of the nicest things to see was the range of people drawn in, admiring his work, his art, his prowess. It’s not something many are able to do. Everything the man has ever done has been with nothing but self respect and grace, he’s never said to much, he’s never been in it for the money and it shows because a decade on from Reality, people were ripping each other apart to get hold of the new Bowie album.
I read a review in The Guardian which claimed the exhibit was in some ways a way of cashing in or was just a promotional tool for the album but if the exhibition were to open anywhere and at any time it would receive exactly the same reaction. The same could be said for the album.

One of my favourite pieces was the room dedicated to Bowie in film. There’s a small cinema area screening scenes from his various on screen appearances; as Tesla, as Warhol, as Jareth. There’s a handwritten note from Jim Henson which accompanied the first draft of Labyrinth, for which Bowie was always in mind for, plus his crystal ball.

The exhibition is one of the most startling and encompassing things I have experienced and it was made all the more powerful by the fact it felt so exclusive within my own headphone world.
Within us all are those separate parts, the characters who want to glam up, and those who want to shy away. Bowie managed to cross back and forth between the two, teaching people it was okay to dress up, to want to look and feel and be different. It’s in part inspired a movement and a realisation and I’m so glad to have felt the bolt strike me.
It seems a million miles from BBC reports of the time addressing Bowie as some kind of (space) oddity and questioning his popularity, sexuality and performance.

We all need those small acts of rebellion and Bowie helped a lot of people to accept theirs.
Today I am wearing my girlfriend’s earring. It will mostly go unnoticed but to me, I’m a rebel rebel. 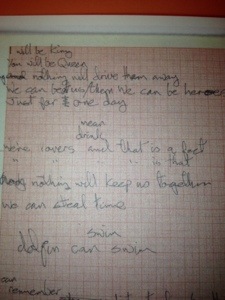