Last week I got to enjoy the intoxicating scent of a pre-show toilet freak out. For any of you who have followed my ridiculous antics for a while, you’ll know this is part of my process before I take to the stage. This time it was for my return to improvised comedy. I haven’t taken part in improv for almost four years after it became a SFZ in late 2014. I’ve got to say, it was great to be back. 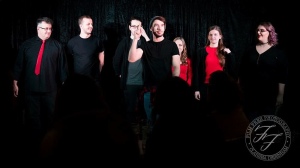 I first got into it after I was tricked. My friend Danny convinced me it would be good for my confidence and that there was no obligation to do anything outside of my comfort zone. I’m sure he was entirely aware that existing is outside of my comfort zone, but I persisted. On our first night at the class we were told we would be doing ten weeks of the course before a showcase in Southend. I stared at Danny, hard. He smirked.

I have met some of the most incredible friends through improv. It takes a certain kind of person to wish that kind of panic-inducing fresh hell upon themselves and, as it turns out, they’re the kind of people I want to be around. There’s a wonderful supportive network of individuals waiting.

I’ve come a long way from that first show but it hasn’t changed the absolute terror that grips me in the half an hour before I am due onstage. I’ve been told that I appeared to be drinking desperately at the side of the stage, not just before, but during the show. I think I managed to fathom my way through it all. I made jokes about topics I would not usually touch with a bargepole, the whole time supported by Lee, John and four new improv friends.

It might make me more uncomfortable than when a friend’s mum hits on me but it is a great form of discomfort.

I’ll be shaking my little tush again this Saturday but Laughter Academy showcases are on from Wednesday to Sunday this week. 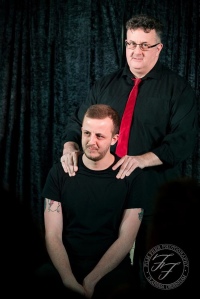