My first stand up.

For two days I had chest pains every time someone mentioned it to me, or asked how I was feeling. My legs would change from a solid to a liquid and I would need the support of a good sturdy surface. This was how my body chose to tell me I was heading for my first ever stand up performance.

I’m a bit of a show off at times, but under conditions. I can also be an introvert, I cross that line like a Morris dancer, often and off beat. I’ve wanted to try stand up for a long time because it is something I admire other people for doing, today even more so. That isn’t to say I want to do everything I admire others for doing, although I’ve tried chopping wood and tightrope walking and I’m shit at both.

Last night I performed ten minutes of stand up at The Alex in Southend as part of a new monthly open mic night hosted by Little Smash Presents. It was without a doubt one of the best experiences of my life. It was also one of the most terrifying. I hate that hybrid but it draws me right in.

I spent yesterday afternoon in a pub, watching people watching football, and trying not to think about what I was going to have to do. I don’t even know what to compare it to. Maybe being in the queue for a rollercoaster? You’ve committed to it but you can see a sobbing nine-year-old avec mother pushing their way back through the crowd as the child realises this isn’t for him and has the benefit of being able to cry to get what they want still. I wanted to be that kid, to just backtrack through the crowd and run away, maybe have a go on the teacups. When I thought on it I realised I sort of crave that disgusting nausea, and the way my stomach curdles, it’s what lets me know I truly care about something.

I had faith in my material. Even when I was living it I believed it could one day be harnessed and shaped, like the ghost of Swayze over Moore’s dungaree-clad body, smoothing that pot up like a mighty clay cock. I knew it would make people laugh because life is funny, as long as you think of it in the correct terms. As ‘first world problems’ as my material is, it’s still a matter of tragedy + time = comedy. I observed and I reported.

Before the audience filed in I met the other acts, people working the circuit, people who have honed their craft and paid their dues and their own travel costs evidently.
They all had brilliant advice for me, told me to take my time, to move the mic stand out of my way, and to take a sip of drink when I was in need of a moment’s respite. I still felt like an observer though. When everyone started pouring into the room and taking seats I started to get really concerned. There was no getting out now. They had the overhead bars pulled down on me tight. We were starting our ascent.

Ross, Luke and Liam all completely blasted their way through, Ross as compere for his night and the others throwing in brilliant gags about knife crime in McDonalds ads and being turned down by prostitutes. Then I realised I had to go onstage. I was leaning against the side wall and didn’t feel I could leave it. I tried to will my limbs into action but I just remained slumped, my heart beating abnormally fast and my forehead, pits and hands sweating as though I were on the verge of a nervous breakdown.

Ross announced my name and I walked onstage and the applause was so warm and receptive that I forgot every word I had ever known. I picked the microphone off the stand and swore, forgetting the important rule of moving it to the side in the process… and then I was off, or on, or in.
I got my first laugh where I had assumed it would be and believe I held my own from there.
It was so different to anything I had done before. A completely different temperament and atmosphere to drama or improv or gigs.
I had so many people there in support that I felt stronger for it. Once I got that first laugh I realised the whole thing wasn’t in my head, and that I could possibly be funny if I really put my mind to it. The performances in front of a mirror with a hairbrush over the course of a month had served me well.

As I returned the microphone to the stand and walked offstage I felt like I was going to collapse, but as a result of the fear and adrenaline coexisting in me. People shook my hand and hugged me but I was just in a daze. It’s just dawning on me now, the following morning, what happened and what I have done. It was amazing.

After the interval which followed my set there were four more performers; John, Sam, Sean and Chris. John, who I know from improv seemed so natural onstage, as though the whole thing were just something he had walked in on. His observations on the kind of people who do stand up were spot on.
When Sam got up I was as nervous and excited as I had been for my own set. Sam and I met through our friend Danny when he coaxed us into starting to attend an improv group. That’s why it was really good that we both made our first tentative steps into stand up at the same time. His routine was just what I expected; brilliant, dark and charmingly shambolic. I also really enjoyed Sean’s set, a comedian I had seen at the recent Southend Comedy Festival. The last act Chris Ashton knocked it out of the park. From across the room I could see my friends flailing about laughing and I can guarantee we will be poaching some of his puns for our everyday conversations.

It was such an incredible and terrifying thing to do but something I’m so glad I got to be a part of. I want to thank all of the other acts for their kind words and excellent performances, to Ross for having me, to Sam for stepping up to stand up alongside me, to Antony and Lucy for making such a ridiculous journey just to see me, and to each and every person who showed up, or text or tweeted me good luck. Mostly, thank you to my incredible girlfriend for loving me and believing in me and to my family for giving me such versatile material.
You’re all golden. 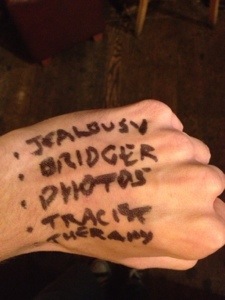 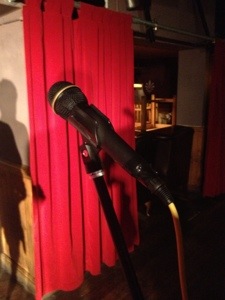